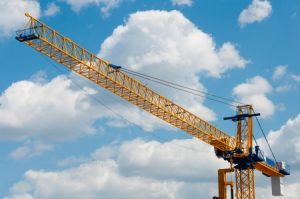 Representatives from the Wisconsin-based Manitowoc Company brought their A-game to last week’s INTERMAT construction tradeshow in Paris, displaying a diverse selection of cranes and technologies designed for some of the world’s most demanding and ambitious infrastructure projects. The centerpieces of the Manitowoc display were two new cranes in the company’s Potain line of tower cranes, which is celebrating its 90th anniversary this year.

The new Hup self-erecting cranes have a maximum capacity of four tons, and a narrow rear-slewing radius of just 2.25. This makes them ideal for projects in congested urban areas where workspace is at a premium. They occupy the same footprint as the company’s Igo 36 cranes, but the Hup cranes are taller and better able to operate in tight working environments. They also feature a new radio remote control system powered by Potain’s Smart Set Up software.

The other Manitowoc tower crane showcased at INTERMAT was the MDT 389, which is now the largest topless crane in the Potain lineup. This crane incorporates the company’s patented Crane Control System (CCS), which offers an ergonomic, user-friendly operating system for crane owners. The MDT 389 comes in two distinct versions as well—one has a 12 ton maximum capacity, and the other offers an increased 16 ton capacity.

During a presentation, Jean-Noel Daguin, senior vice president of tower cranes at Manitowoc, outlined a number of potential applications for these two new cranes in the region, including preparations for the 2024 Olympic Games in Paris.